skip to main | skip to sidebar

How to Buy Artisanal Ice Cream in San Francisco

This blog post from SFWeekly is spot on hilarious about our local ice cream scene. LOL!
Posted by miz creamcone at 12:55 PM 2 comments:

This is why I make my own ice cream!

Today I learned that Haagen Daz, Breyers and Baskin-Robbins are getting their milk from dairies that inject their cows with genetically engineered bovine growth hormone (rBGH). Gross! Ben and Jerry’s on the other hand has chosen to be rBGH free. This is surprising news, considering many other countries, including my Canada, has banned the use of this hormone. How evil is Monsado, who developed rBGH, and the FDA! And I’m particularly disappointed with Haagen Daz, which until now was my favourite store bought ice cream. Boooo! Read on...

P.S. I use Clover Organic milk in my ice cream.
Posted by miz creamcone at 1:34 PM 2 comments: 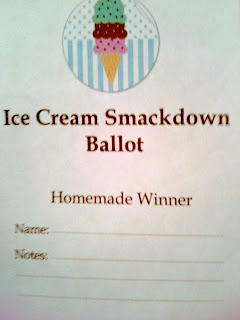 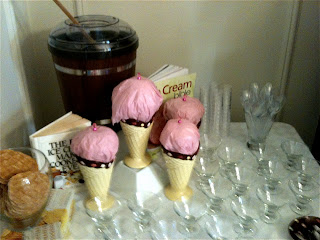 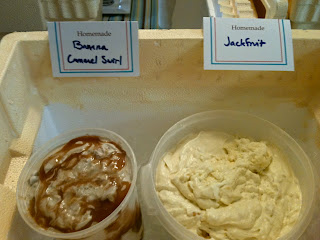 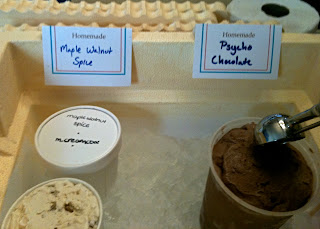 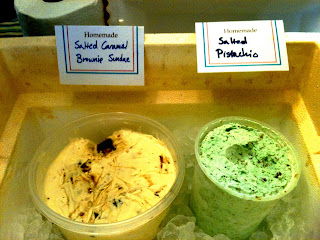 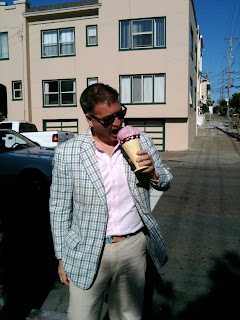 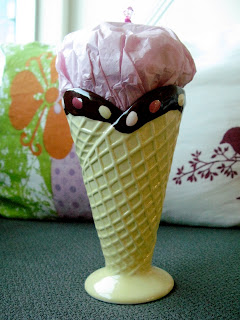 My friend Aaron invited me to enter an ice cream smackdown party hosted by the lovely Alexis. It was so much fun! Alexis went all out with the details and decorations. My favourite touches were the ice cream dish set, adorable ballot cards and portable coolers to keep the ice cream from melting while everyone sampled all the creamy goodness -- genius!

Competition was fierce. Seven handmade creations were judged -- pyscho chocolate, salted pistachio, jackfruit, banana caramel swirl, salted caramel brownie sundae, blackberry and maple walnut spice (made by yours truly). After several rounds of tasting, the ballots were counted and it was a decisive win. Salted caramel brownie laid the big smackdown! Salted pistachio and maple walnut spice tied for second. Yippee, yippee! I seriously HEART my little second place trophy. It's the cutest. (That's Aaron trying to gnaw on it). This really made my day!

Thanks again Alexis for a super fantastic time and congrats on the tie. She made the delicious pistachio. :)
Posted by miz creamcone at 2:42 PM 3 comments:

Maple Spice and all things nice 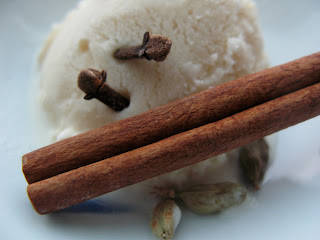 I made maple walnut ice cream a couple of weeks ago and haven't eaten pancakes lately so I had plenty of leftover maple syrup to try the egg-less maple spice recipe from the recent New York Times article. This ice cream was jazzed up with cinnamon, cardamom and cloves. Brilliant! It came out smooth and creamy with a hint of spice. It also maintained its texture a lot more than the Blue Bottle coffee ice cream, which I made without the eggs.

David Lebovitz said in the New York Times article (which I missed the first time I read it, oops!) that alcohol or liquid sugars like maple syrup or just raising the sugar content help with the texture and prevent it from freezing rock solid. Aha! It has nothing to do with eggs or heating milk without cream. My declared cousin, Lyndsay, talented proprietor of Coco Cake Cupcakes and fellow ice cream maker, also noticed this when she made her delicious Vietnamese coffee ice cream using sweetened condensed milk.

Sugar and spice and all things nice
That's what good girls and ice cream are made of. 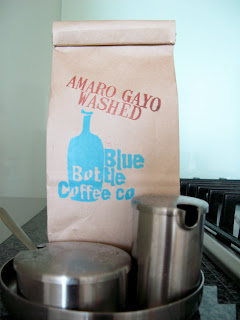 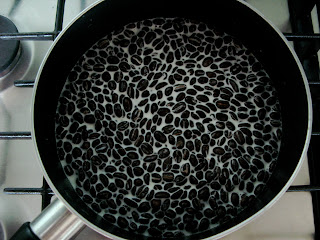 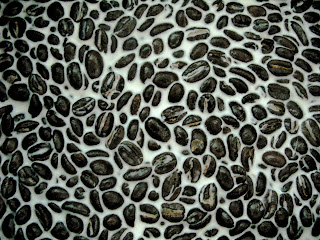 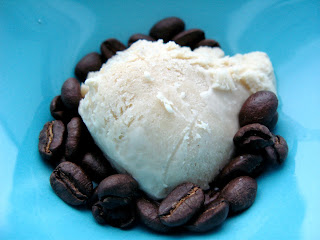 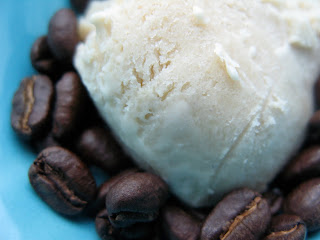 Coffee is the only thing I like about mornings. Bad coffee gets the job done. Good coffee is an added bonus. For an amazing coffee, I'll get up at the crack of dawn and wait in a block-long line. And that's what I do every Saturday morning at the Blue Bottle kiosk in the Ferry Plaza. Based in Oakland, the company roasts organic coffee on vintage gear, puts it in compostable bags and gets the beans to their customers within 48 hours. Each cup is dripped meticulously leaving you with the most aromatic and flavourful java to satiate your addiction. But how would Blue Bottle translate into ice cream?

Following another David Levobitz recipe, I heated the coffee beans with the milk and let it stand for 20 minutes. Then I strained the mixture into a bowl of cream, pressing firmly on the beans to extract as much coffee as possible. At this point, I was skeptical of how this would turn out as the flavour seemed weak and the colour looked more like vanilla than coffee. I also wondered if it was worth the expensive bag of Blue Bottle or if regular Safeway coffee beans would suffice.

The result was quite satisfying and I could detect the distinct Blue Bottle taste, especially being so familiar with their coffee. (Although I probably won't use Blue Bottle again for economic reasons. If I'm paying $24 for beans I'd rather have the bag last longer and enjoy it as coffee). As an egg-based ice cream, it was creamy but not as much as I expected. In fact, several days later, the texture had gone a bit icy and dry. (If you look carefully, you can see it in the pictures). Hmm...there goes my previous theory that heating the milk without the cream makes it creamier.

I brought some ice cream over to my neighbour, who happened to have a container of coffee Haagen Daz in his freezer and we did an impromptu taste test. To my surprise, we both thought my Blue Bottle was way better and the Haagen Daz tasted bland in comparison. Wow! I always held Haagen Daz to high standards but it must be the difference between good and bad beans and homemade versus store bought! Now if only my neighbour would post a testimonial...
Posted by miz creamcone at 8:47 PM 1 comment: 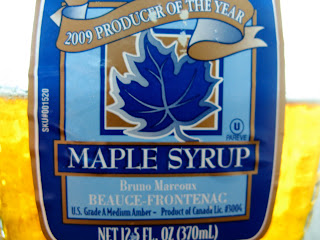 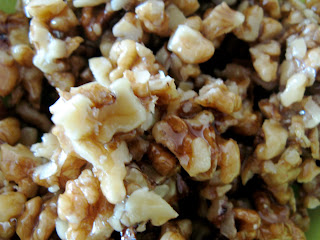 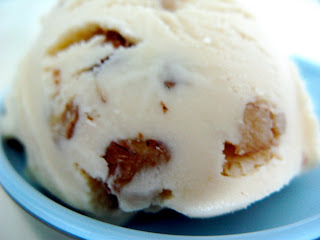 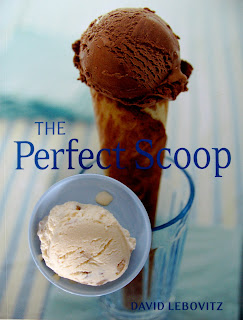 Canadians have an affinity for anything maple. Our flag bears the maple leaf. The province of Quebec produces the largest amount of maple syrup in the world. And apparently Canadian baby boomers are the biggest eaters of maple walnut ice cream. According to an Angus Reid study, Canucks over the age of 55 prefer nuttier ice creams like maple walnut and praline pecan, while the younger generation prefer chunkier and more textured ones like chocolate chip cookie dough. Well, call me Gen X and a Canadian who really enjoyed making and devouring this simple but hard-to-find-in-America deliciousness.
I used a recipe found in "A Perfect Scoop", one of the best ice cream books out there by David Lebovitz. Using all organic products plus Grade A maple syrup made in Canada, natch, I churned out 3 pints that I think rivaled the quality of Haagen-Daz. For some reason, this batch had the perfect texture and consistency. Usually I need to let the ice cream soften for 20-30 minutes at room temperature before eating it but this time I could dig my spoon in right away. I think this was a result of not cooking the milk, egg and cream together to form the custard base. Instead I just heated the milk and egg then strained the mixture into a bowl of cream. How creamy and luscious it turned out with an understated maple flavour. The best part of the ice cream came from the genius of David Lebovitz. He suggested to use "wet" walnuts where you glaze the nuts with maple syrup -- such a subtle detail, which created tiny bursts of crunchy pleasure every time I bit into one.
I've a friend and co-worker who loves to joke with me about making ice cream and this blog. He's so hilarious that I brought him a container of my maple walnut to the office, which he shared in a meeting. My taste buds knew this was one of my best ice creams. But it was extremely flattering when a work bud, who's never emailed me before wrote, "OMFG, your ice cream was so good!" YAY! It makes me happy knowing I could make someone add the "F" to "OMG" with my ice cream. Now that's oh, maple goodness!
Posted by miz creamcone at 3:00 PM 1 comment:

To Egg or Not to Egg? 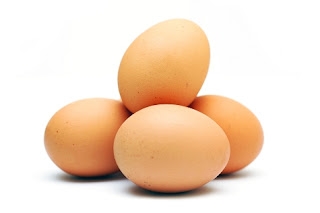 The New York Times posted an excellent article today about going egg-free to create a lighter, more intensely flavoured ice cream. It's certainly food for thought. What I absolutely love most about ice cream is its creamy, decadent richness, which comes from using an egg-based custard. In the article, David Lebovitz, author of "A Perfect Scoop" (my bible), says this new egg-free ice cream goes against the Haagen-Daz style of “fat-is-flavor”. But isn't fattening the very point of ice cream?

In any case, I'll definitely try out these egg-less recipes to compare. At the very least, it might help spare me some calories.
Posted by miz creamcone at 1:27 PM 2 comments: